Shares of Aphria plunged nearly 18 per cent Wednesday despite the cannabis producer reporting fourth-quarter revenue figures that beat analyst expectations. Investors focused their attention on Aphria’s sizable net loss of $98.8 million in the quarter, much of which stemmed from impairment charges related to its businesses in Jamaica, Lesotho, Colombia and Argentina. In an interview with BNN Bloomberg, Aphria CEO Irwin Simon said the impairments “make sense in the long term of the business” and that those businesses weren’t much of a focus for him when he took on the CEO role last year. Simon also weighed in on the company’s merger discussions with Aurora Cannabis, previously reported by BNN Bloomberg. He declined to provide further details on his discussions with Aurora, but stated the industry is in need of consolidation and would explore any opportunities that would help Aphria be a more efficient company.

Vancouver-based cannabis biotechnology firm Willow Biosciences said Wednesday it has begun a pilot program aimed at synthetically creating cannabinoids. Willow said it started a 500-litre production run to deliver samples of cannabigerol, one of the many cannabinoids found in the cannabis plant, with results expected in the third quarter of this year. The company said the “seed train” that is used to start the fermenter for production was initiated earlier this week and includes a proprietary yeast strain to start the week-long production process. AltaCorp analyst David Kideckel said in a report Wednesday that Willow is also in active discussions with several Fortune 500 companies regarding the potential commercialization of its biosynthetically-produced cannabinoids.

Cannabis may be an effective way to treat cancer: Australian researchers

There’s a chance that cannabis will emerge as a viable treatment in fighting cancer, according to researchers at the University of Newcastle in Australia. The researchers completed a three-year study that found that a modified strain of cannabis can fight against certain types of cancer cells while avoiding harming the human body’s own cells. The strain used, dubbed “Eve,” doesn’t contain much THC, but has a very high amount of CBD which was shown to be effective when treating leukaemia cells, the researchers said. While the researchers will see how the strain fares against other types of cancer cells, further research and peer-reviewed studies need to be completed to determine precisely how effective cannabis is when treating cancer or other illnesses.

The amount of cannabis sold in Canada by Aphria in its fiscal fourth quarter, the largest such amount to date for a Canadian pot producer. 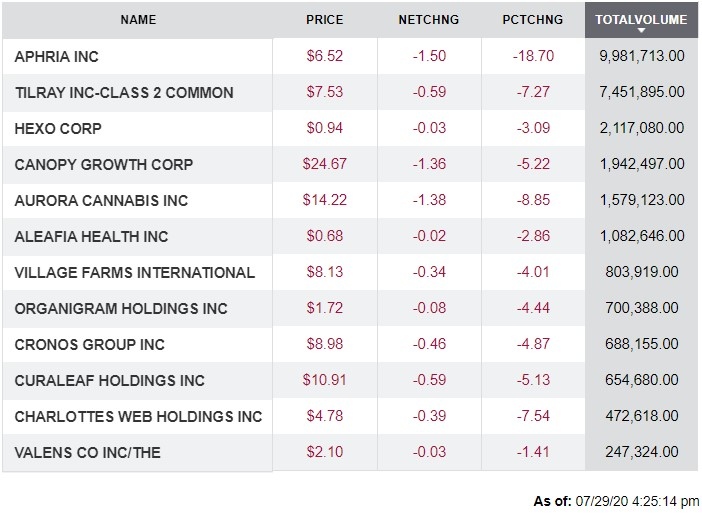 Cannabis Canada is BNN Bloomberg’s in-depth series exploring the ongoing growth of the Canadian recreational cannabis industry. Read more here and subscribe to our Cannabis Canada newsletter to have the latest news delivered directly to your inbox every day.