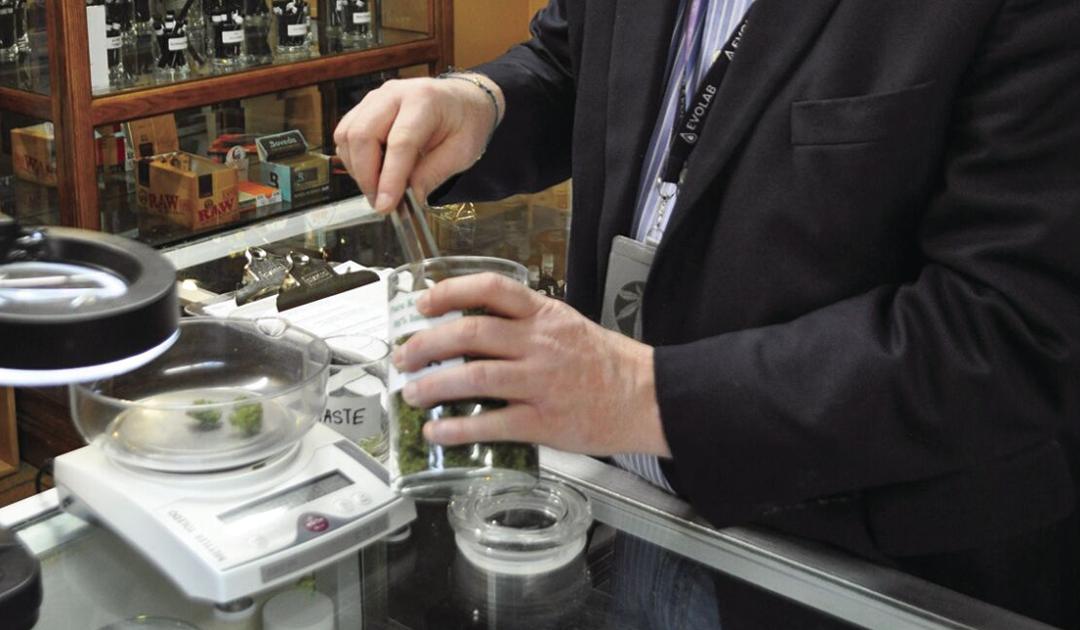 The COVID-19 pandemic has fired up the cannabis industry.

According to an industry report described on Forbes’ website on Aug. 3, the industry’s growth is outpacing last year. Nationally, marijuana sales spiked in mid-March, most likely driven by consumers who were stocking up because they weren’t sure whether their dispensaries would remain open.

Sales subsequently stabilized at a higher level than they were before. On average, sales through June were 40 percent higher than in 2019, according to the report.

Medical marijuana stores in Colorado Springs have been enjoying the highs as well, as indicated by sales tax revenue the city collects.

Before the pandemic began to disrupt lives and businesses, marijuana revenue was increasing to the tune of 14 to 20 percent per month, according to city sales tax reports. The tax figures reflect business activity that occurred the previous month.

Manitou Springs doesn’t break out revenue from its two recreational pot shops, instead placing them in a category called Other In City, but they are the biggest revenue generators of the 14 businesses in the category.

In June, the most recent month for which revenue figures are available, the category posted an 18.9 percent increase in sales tax revenue, as compared with June 2019.

For the year to date through June, revenue in this category was running 12.8 percent ahead of last year.

Marijuana revenue in Colorado Springs constitutes a small percentage of the city’s overall sales tax collections — about 1 to 2 percent, depending on the month.

The proposal to issue recreational licenses to 24 of the city’s 122 medical marijuana stores faced opposition from Mayor John Suthers as well as marijuana dispensary owners, who didn’t like that the 24 stores would be chosen by lottery.

A state law passed last year has permitted delivery of medical cannabis since Jan. 2, but local jurisdictions must opt in. Proponents hoped that the city would allow deliveries here. The Colorado Springs council rejected that idea at its Sept. 21 work session.

While medical and recreational marijuana stores are enjoying a sales bump, vendors of CBD products are not faring quite as well.

Thanks to increased sales, he’s already been able to hire three additional employees.

“Our sales increased in a way that mirrors the increase in medical marijuana sales overall, which was up measurably,” he said. “We were fortunate to have a business that was  declared essential by the governor, so we were able to stay open.”

Sales tapered off a bit in July but are still better than in 2019, he said.

He attributes the Q2 bump to stimulus payments and as well as “people being out of work and at home, requiring additional medicine.”

Scudder said sales have also increased at his Aurora recreational pot shop, but not as much as on the medical side.

“There was a huge dichotomy between the rec stores in the state that were highly dependent upon tourism, like the ones in the ski areas,” he said. “Our store in Aurora wasn’t affected almost at all, because it’s more of a neighborhood store in the center of Aurora, and we don’t have a huge tourist component.”

Scudder appeared before council to advocate for recreational sales in Colorado Springs.

“It’s pretty clear that city council members made it their position that the industry needs to be the one to solve this issue,” he said. He is working with a group to create a ballot initiative and thinks that “it’s going to happen at some point in the future.”

Colorado Springs dispensaries have consistent, stable customer bases that are carrying them through, said Jason Warf, executive director of the Southern Colorado Cannabis Council, a nonprofit industry group based in Colorado Springs.

Dispensaries and recreational stores in Pueblo also have loyal customers and have seen gains similar to those in Colorado Springs, he said.

Warf said not all stores in cities that rely on tourism have seen sales drop.

He said he has heard from owners in Salida and Lake City that they have had an uptick in sales. In Manitou, he said, “it’s constantly consistent because there is no other rec within an hour or so. If I were to make an educated guess, I would say that the trend is there as well.”

Warf said the majority of owners in his organization believe they would benefit from being able to sell recreational marijuana.

“I will be talking with our lobbyists in the next week or so and expressing our desire to move forward,” he said. “I think there’s some possibilities, and we can also do a special election on the issue if enough signatures are gathered. … To be fair, I’m not super optimistic we’re going to see it happen before there’s a new city council.”

“Marijuana, guns, alcohol — those are the industries that are killing it.”

Stores that sell products containing CBD, a nonpsychoactive component of the cannabis plant, had to close during the general shutdown during the safe-at-home period in the state.

But sales at some CBD stores have held up when compared with last year’s volume.

“We adapted very quickly to the changing guidelines,” said Melinda Bloch, president of Discover CBD. The company has five stores in Colorado and franchises across the country for its white-label products, such as tinctures, creams and ointments infused with CBD. It manufactures all of its products in Colorado Springs.

“We implemented curbside pickup almost immediately, which really helped our customers,” Bloch said. “Even though we aren’t considered essential by most federal standards, we are essential to our customers, and our customers stayed very loyal to us during this time.”

Discover CBD boosted its online platform so customers could place orders via the website, pick up their orders outside and never have to enter the stores.

“We still have those options available, … and we also have some social distancing guidelines put in place now that everything is back open,” Bloch said.

CBD users claim benefits from CBD products that range from reducing anxiety and depression to relieving pain and inflammation.

Discover CBD’s most popular products are its Active CBD oil tinctures, which deliver a dose of CBD under the tongue via a dropper; CBD gummies and pet products.

“We did see quite a rise in pet products as people were spending more time at home with their pets,” Bloch said.

The company currently has 30 employees and has not had to lay off anyone, she said.

Overall, “we’ve just been able to keep things steady throughout everything,” Bloch said. “Our online sales are better, but our in-store definitely suffered because we have a lot of tourists that visit our stores every year, and that group of people, we’re definitely not capturing anymore.”

Bloch said the CBD industry overall has had mixed results.

“We do have some wholesalers that had to close their business entirely because of COVID,” she said. “We’ve had some people say that it’s helped them a little bit, especially the ones who do have online platforms. But it’s really on a case-by-case basis.”

“For wholesale and white labeling — meaning making products for another company that puts their brand on it, that has gone down for a significant amount of companies that I’ve spoken to,” he said.

That’s because many stores that were selling white-label products have not been reordering. As a result, some wholesalers have shut down their CBD production and are now making hand sanitizers and cleaning products, he said.

The company’s position is bolstered by its sister company, Strawberry Fields, with two recreational marijuana stores in Pueblo and one each in Trinidad and Downieville, where business is booming.

“Marijuana, guns, alcohol — those are the industries that are killing it,” VanLandschoot said.

The CBD store in Colorado Springs sells a cosmetics line of lotions, salves, bath bombs, tinctures and pet products. Best sellers are the tinctures and lotions.

Adventure CBD’s production was down a bit at the end of March, “but everyone is back in staff and working,” VanLandschoot said. nCSBJ