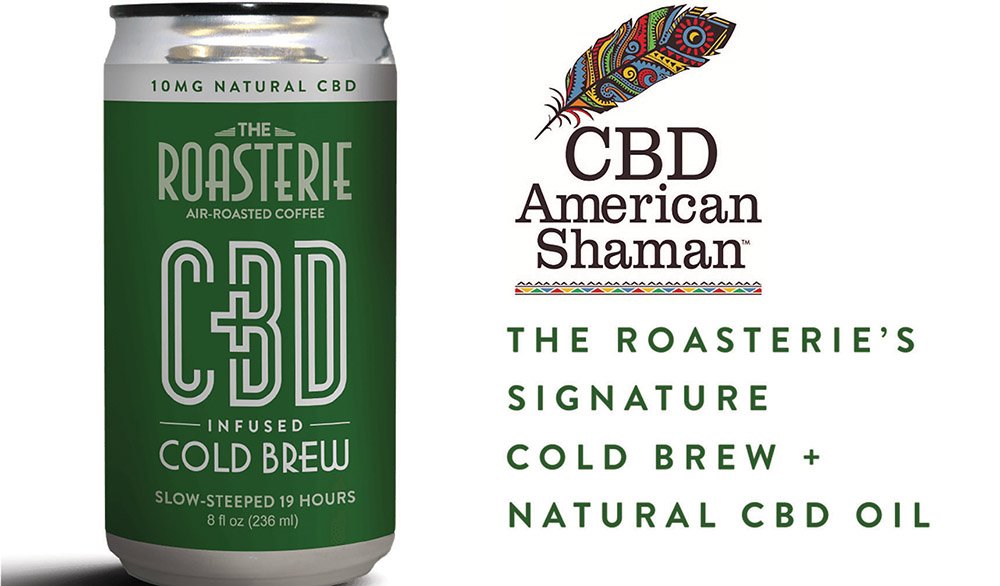 American Shaman is a midwestern retailer known for its enthusiasm for CBD, a chemical emerging as a calming complement to coffee. Headquartered in Kansas City the company teamed up with air-roast specialists The Roasterie last year to introduce a CBD-infused cold brew. A canned CBD tea followed this summer.

Shaman, which operates stores in several states and ships nationally, notes that now that cultivating hemp is legal there is a rush to deliver more palatable and convenient forms of CBD (cannabidiol), the non-psychoactive companion to THC (tetrahydrocannabinol).

Vince Sanders, American Shaman founder and c.e.o., perfected a water-soluble hemp oil that not only dissolves easily in coffee but is more bioavailable. “Humans have known the incredible ability of these cannabinoids for thousands of years. To see it embraced at the level it is today. Wow.” he told In Kansas City.

Early on, considering how expensive it was, it was obvious we couldn’t get it into the hands of many people. Worse yet, he explains, “if you hold it under your tongue your mouth will absorb only about 10%, with 90% literally wasted in your GI [gastrointestinal] tract. That’s when I asked, “can we improve the bioavailability somehow?” The solution was to create a nano-sized droplet [approximately 50 nanometers]. “When it gets that small, your body cannot stop it from getting in. To put it into perspective, the smallest bacteria is 200 nanometers,” he explained to Cannabis Tech Today.

Founded in 1993 by Danny O’Neill, The Roasterie is one of the larger roasters in the Kansas City area with eight cafes and a shop in Children’s Mercy Hospital. Sanders approached The Roasterie, headquartered nearby, and the companies jointly developed a ready-to-drink line of CBD-infused coffees and tea.

Beverage manufacturers are in the forefront of the CBD wave, promoting coffee as an ideal way to ingest CBD while avoiding claims of medical benefits and stressing that the chemical does not change brain function. Clinicians are confident CBD does not result in alterations in perception, mood, consciousness, cognition, or behavior but researchers have yet to convincingly demonstrate CBD’s therapeutic relief for anxiety. Less well documented are claims that CBD reduces acne, promotes heart health, and diabetes prevention.

The lack of clinical trials will not halt the rush – consumers overwhelming praise CBD for relieving anxiety and depression; they say it provides a good night’s rest for insomniacs and treatment for chronic pain.

It is clear that CBD (often paired with THC) provides significant reduction of symptoms related to cancer and cancer treatment, including nausea, vomiting, and pain. Coffee is said to be the perfect pairing because CBD smooths the buzz without sacrificing the energy you get from a cup of coffee. “When you consume them both, you experience a bit of a push-pull effect,” writes the Augusta Free Press, adding, “While you may be tempted to think they are supposed to cancel each other out, the reality is that their effects enhance each other.”

A report released in September by Acosta marketing found 28% of consumers are currently using CBD products “daily or as-needed.” “Millennials, males and those with four-year degrees are currently the key CBD demographics,” according to The CBD Effect: A Rapidly Emerging Consumer Trend. The report finds 56% of Millennials, 32% of Gen X, and 15% of boomers take CBD daily or as-needed. “Millennials most commonly use CBD for anxiety [31%] and general wellness [30%], while Gen X and Boomers use CBD products to help with joint pain [31%] and [36%], respectively and muscle pain [both 23%],” according to Acosta.

Promoting coffee as healthful is a trend but unlike tea, medical research and media are mixed. The relationship between coffee and health continues to be a heavily debated topic, according to the National Coffee Association (NCA).

When the federal government decriminalized cultivation, legislatures in 46 states followed, issuing 16,877 licenses issued to farmers in 34 states and expanding acreage to 511,442.

But as the industry was celebrating the opening of the first CBD cafe, The Food and Drug Administration in September sent warning letters to several companies for unapproved drug claims for humans (and animals, too).

Washington is the latest state to ban CBD as a food and drink ingredient joining Ohio and North Carolina. Meanwhile, Maine and Massachusetts relaxed their policies. Food and drinks containing CBD were banned in New York City

NYC’s Department of Health and Mental Hygiene (DOH) announced that it would begin ordering all restaurants and bars in the city to stop selling CBD-infused products, citing an FDA ruling from December saying that it is “unlawful to add CBD to food or drink.” DOH primarily targeted restaurants serving CBD edibles.

No citations [fines range from $250 to $800] were issued but violators will be subject to fines after Oct. 1 for selling “adulterated foods.

Giannis Houmis, who opened the CBD-friendly cafe Buds and Beans in Brooklyn earlier this year, told Gothamist he would stop offering his customers CBD-infused shots with their coffee but will keep selling individual CBD products on the side for customers to mix into their drinks on their own.

The FDA in September warned Curaleaf, a publicly traded multi-billion-dollar firm based in Canada, that a variety of statements on the company’s website constitute “unapproved human drug claims” and that its products are misbranded. These products include lotions, pain-relief patches, tinctures, and vape pen products. The company was told it could not claim that CBD can be used to:

The misbranding is due to labeling “that fails to bear adequate directions under which a layperson can use a drug safely and for the purpose for which it is intended.”