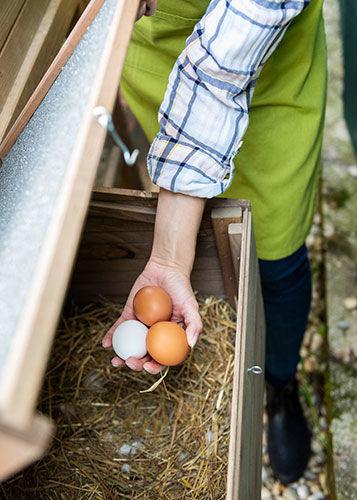 MINNEAPOLIS — U.S. Agriculture Secretary Sonny Perdue appeared to be delivering hard truth to the heartland in October, when he said he wasn’t sure family dairies would survive.

Consolidation has been the driving force in agriculture for decades, and Perdue’s comments reflect that reality. “In America, the big get bigger and the small go out,” Perdue said at a dairy exposition in Wisconsin.

But not everyone agrees the trend will continue unabated.

Conventional agriculture that emphasizes economies of scale faces its own fundamental weaknesses, and several forces are reshaping the future of farming in ways that may favor the small.

“There is a very strong future for family farms,” said Russell Diez-Canseco, CEO of Vital Farms, an umbrella company for independent egg farmers in nine states.

Small farmers and people like Diez-Canseco who work with them describe an industry that’s evolving and in which they are well-positioned to meet demand for new types of food and other crops. Younger farmers are less interested in fence row-to-fence row crop production. Consumers want a more direct relationship with their food. Alternative crops, such as hemp, that can be grown on small acreages at a profit, are gaining ground in the marketplace.

Large-scale corn and soybean farmers are more productive than ever, but their livelihood depends on the government. Corn prices are propped up by ethanol mandates, for instance. Soybean growers are worried they will never fully recover a Chinese market that has been decimated by the trade war and a disease that wiped out many pigs in that country. More than a third of U.S. farm income in 2019 is expected to come from the government.

Meanwhile, the inputs for corn and soybean production are depleting and becoming more expensive. Farmers must contend with weeds and insects increasingly resistant to herbicides and pesticides, for instance. And the government system designed to support those crops has encouraged farmers to grow too much of them.

“A huge amount of public policies are supporting keeping the current system going, and what that’s leading to is overproduction, which is one of our problems,” said Fred Kirschenmann, a fellow at the Leopold Center for Sustainable Agriculture at Iowa State University who manages an organic farm in North Dakota.

On top of all that, the men and women who run conventional farms are aging out of the business, and the younger people interested in farming are eager to try something different, if they are able to buy or rent land.

To Kirschenmann, it all means that an era in which farmers relied on nonrenewable inputs like oil and rock phosphate to wrest the maximum number of calories from the ground is coming to a close.

“There are examples of farmers already beginning to transition to a different kind of future that can be successful,” Kirschenmann said. “In my conversations with the young farmers, who are age 30 and 40, they don’t want to do the input-intensive commodity agriculture.”

Helping those young farmers figure out a business model that works will take effort and investment, Kirschenmann said, but even redirecting a small percentage of the subsidies for conventional corn and soybeans to that project could help.

The transition Kirschenmann seeks would be a seismic shift.

Most small farmers were squeezed out of hog, poultry and cattle production by the late 1990s. Conventional corn and soybean farming falls to fewer farmers each year as growers retire and their land is snapped up by larger farms nearby. Dairy had been until recently the consolidation holdout, with thousands of smaller farms across Minnesota and Wisconsin, but massive dairies even in Minnesota are now taking a larger share of the milk market and family dairies face existential crises.

That hasn’t stopped some in farming from being bullish about a future where crops aimed at consumer niches can succeed.

Diez-Canseco leads a business that was created as an alternative to large-scale farming. Demand for pasture-raised eggs is growing faster than demand for eggs from chickens kept in huge confinement buildings, he said.

“The key for a small family farm with limited access to capital is to farm in a way that doesn’t compete directly with those parts of our food system which are driven by scale economies,” Diez-Canseco said.

Vital Farms accepts that reality itself — for instance, by packing all its farmers’ eggs at a central packing facility. The company also recognizes how difficult it is for smaller farmers to navigate government programs and subsidies.

“We coordinate and manage all the complex paperwork and inspections that are required to sell eggs in this country. Most small farms wouldn’t have the expertise,” Diez-Canseco said. “A major role that the secretary of agriculture has is ensuring a safe and abundant food system for the United States and our citizens, but all that I would ask for is a level playing field for our farmers regardless of size.”

Sustainable food and direct-to-consumer farming aren’t the only options for farmers interested in staying small. One crop that’s growing quickly in Minnesota is hemp.

The number of licensed hemp growers in the state grew from 51 to 540 in 2019, most of them growing the crop for production of cannabidiol (CBD), the nonpsychoactive cousin of marijuana’s high-inducing component. CBD is a trendy wellness product, and 5-gram bottles of the stuff can retail for as much as $390.

Steven Brown, CEO of Nothing But Hemp, one of a handful of hemp-oil retailers that has popped up in the Twin Cities in recent years, said hemp farming is a profitable option for small farmers.

Craft hemp producers typically cultivate between 10 and 40 acres, he said, and can generate $15,000 to $30,000 in revenue per acre if they are growing the crop for CBD oil, grow the right strains and find the right processor.

“If they’re growing for craft CBD, I think it’s a really good opportunity for smaller farmers,” Brown said. “These small craft farmers will be able to be agile enough to provide the right strains for retailers like me.”

For Kirschenmann, hemp farming is one example of the type of alternative crop that could be the “beginnings of a transition” away from corn and soybeans.

“It became so popular for farmers to simplify their operations. But now we’ve come to the point where that’s not going to work anymore,” he said.