Reason Magazine editor-in-chief Katherine Mangu-Ward on the hemp industry and why marijuana should be legalized.

The U.S. marijuana industry reached $11 billion in consumer spending in 2018.

And Jessie Johnson got a piece of it. Estimates show sales could more than double to $23 billion by 2022. Now, the health care-expert-turned-farmer is looking for more.

Johnson leases 200 acres of land in Weedville, Pennsylvania, and is part of a booming industry: farming legal cannabis and selling it to distributors. The state legalized the medical use of the plant in 2016 and began selling in dispensaries in 2018. 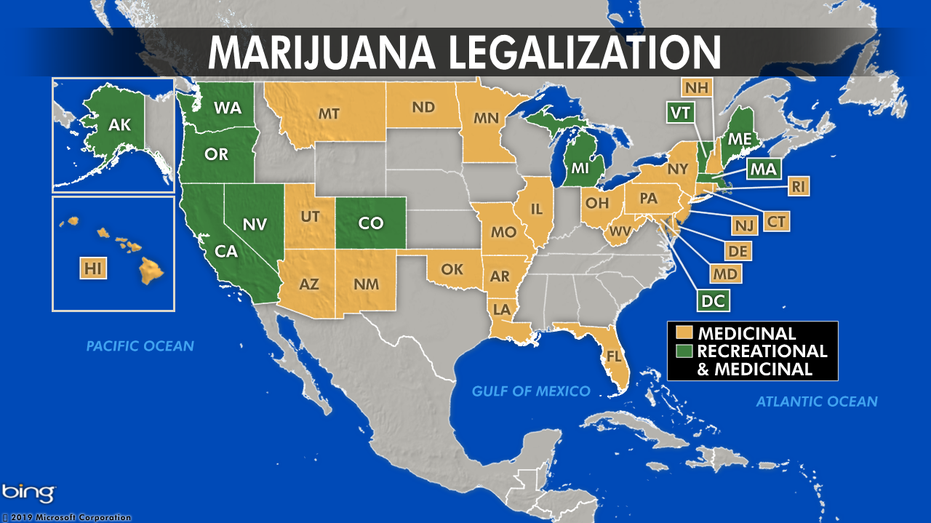 Named Purple Peace, Johnson created her business in 2016 with a mission to “bring legitimacy to the cannabis industry” and to give sick people a chance to try a natural alternative to traditional medicine for pain and other ailments, she told FOX Business.

That’s “accomplished by providing the right products to the right people at the right time,” she said. And she has the credentials to know how: Johnson holds a master’s degree in health care administration, a bachelor’s degree in public health and is certified in several subfields.

She said her business sells every part of the hemp plant: We have a zero-waste policy.”

If a full batch of plants isn’t bought, it’s still used in some way, like composted into the soil, for example.

“I self-funded, accepted in-kind services, sold everything that wasn’t nailed down and created convertible IOUs when the credit card companies and banks denied business with plant-touching companies,” Johnson said.

It’s a common story that has led to congressional hearings and bipartisan support on Capitol Hill to remove its Schedule I classification on the Controlled Substances Act. The law classifies marijuana among other substances like LSD, heroin and cocaine as not having any currently accepted medical use.

In July, experts testified that the federal law has business owners paying an effective federal tax rate higher than 70 percent.

“My concern is looking at the industry as a cash cow and applying all sorts of exorbitant taxes upon it is the same effect as prohibition. It will drive what should be legal commerce back into a violent underground economy,” Rep. Tom McClintock, R-Calif., said.

Rep. Steve Cohen, D-Tenn., though, expressed optimism in finding a solution for business owners like Johnson.

“I’ve been working on this issue for 40 years, and it’s just crazy that we don’t just get it all done.”

– Rep. Steve Cohen, D-Tenn, during a July 2019 congressional hearing on the States Act

And after more than a decade of work, she now says her business is worth $3.5 million. 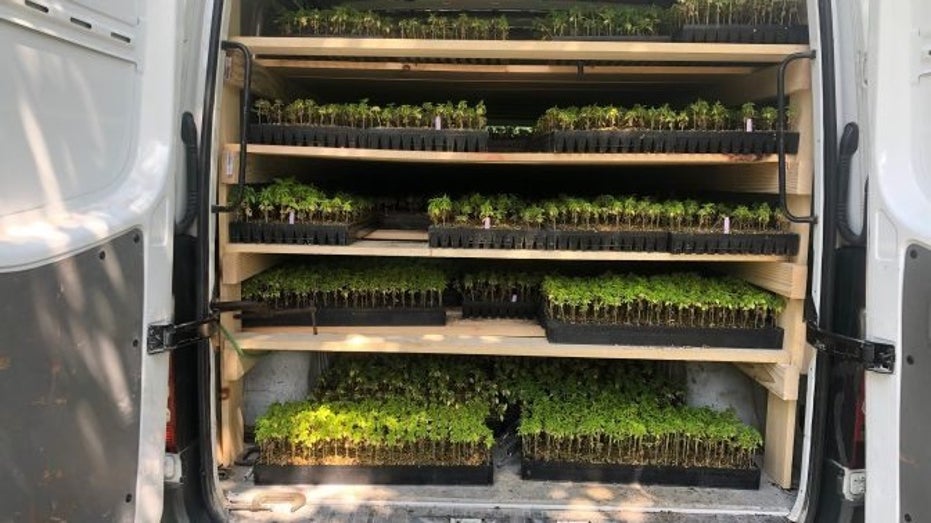 Here’s how the company works:

The farming process starts with getting a permit to grow from the Health Department or Agriculture Department, then obtaining seeds. Planting season begins in April or May, Johnson explained, and harvest occurs in the first two weeks of September.

“Nutrients and pH readings are required and help us create the bloom phase. Sampling and testing of the plants occur 70 to 80 days after planting. Once harvest approval letters are issued,” she said, “we sell it wet or dry.”

Packaging and storing happen after testing for potency as well as heavy metals, pesticides, foreign materials and toxins. Each lot takes five days to nine days to breed results before it’s ultimately ready for distribution.

Of course, Johnson said, the process isn’t perfect. Some of the major challenges include funding and education about the industry.

Then, there’s the challenge of being a woman in a traditionally male-dominated field.

“It’s still true men hold our purse strings,” she said. “I am discouraged to be reliant on male financial backers in an unregulated industry. Having a license to grow has exposed me to more sexual harassment, assault and inappropriate situations than any other experience in business. Male investors often take the opportunity to ask the questions, ‘So you need a sugar daddy?’ and ‘Don’t you have a boyfriend to help you pay for this?’”

Still, Johnson is finding her stride. And the cannabis industry is growing rapidly.

Marijuana has been legalized in 33 states for medicinal use and in 10 states and Washington, D.C. for recreational use. A 2018 Pew Research Center poll found a majority of Americans (62 percent) supported legalizing the plant in some form. And while states can enact their own laws governing CBD oil, it’s legal under federal law.

Democratic presidential hopefuls Sens. Bernie Sanders, I-Vt. and Elizabeth Warren, D-Mass. are among U.S. Congress members pushing for expanded cannabis rights. President Trump’s stances are a bit less clear. But he alluded that this year that he would “probably” support the STATES Act to give protections to state marijuana industries.

When asked by reporters in 2018 outside the White House if he would support states’ marijuana laws from federal intervention (co-authored by Sen. Cory Gardner, R-Colo.), Trump responded, “I support Senator Gardner. I know exactly what he’s doing. We’re looking at it. But I probably will end up supporting it, yes.”

“The pressure will ratchet up and the feds will have to respond to the will of the people,” Karnes, the founder of cannabis industry analysis company GreenWave Advisors, told AG Web last year. “Marijuana likely will trade like any other commodity and someday the U.S. will be exporting cannabis to other countries.” 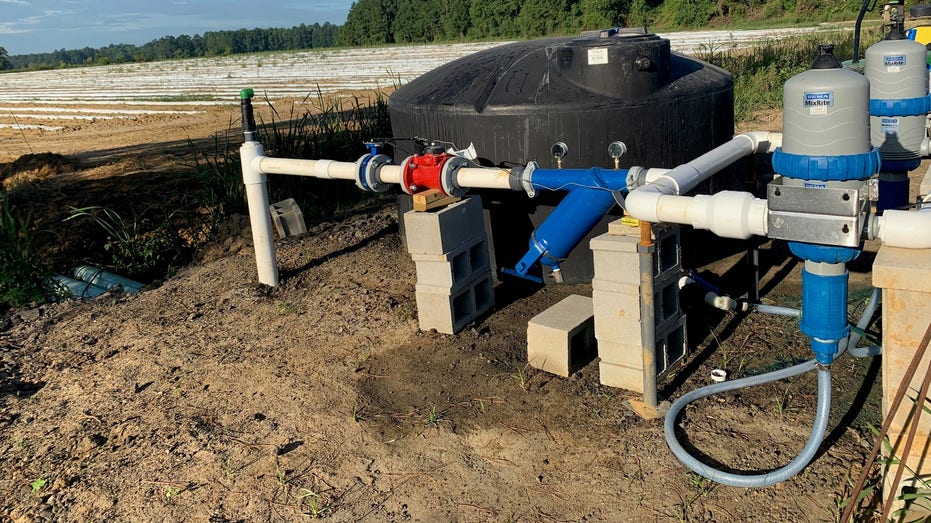 Plus, the money behind the industry keeps growing.

When Colorado legalized marijuana in 2014, tax revenue surged by $500 million. In 2018, national sales for cannabis beat spending on Fortnite and Goldfish crackers combined. And in 2020, it could beat the projected $15 billion revenue of the NFL.

Medical Marijuana Inc. reports hemp-based products could bring in $2 billion in 2022, CBD oil could reach $20 billion by 2024 and recreational sales could hit $12 billion in 2025.

Other projections are way higher.

For farmers like Johnson, that’s good. More demand equals better business. And she’s preparing for her business to get bigger. In addition to the 200 acres of land in Weedville, Purple Peace leases 1,000,000 acres across the country and is actively expanding.

GET FOX BUSINESS ON THE GO BY CLICKING HERE

The company is also working on a mobile app, which would use artificial intelligence and machine learning to help consumers find cannabis products wherever they are.

“At the end of the day,” Johnson said, “I want to use my experience to help people.”